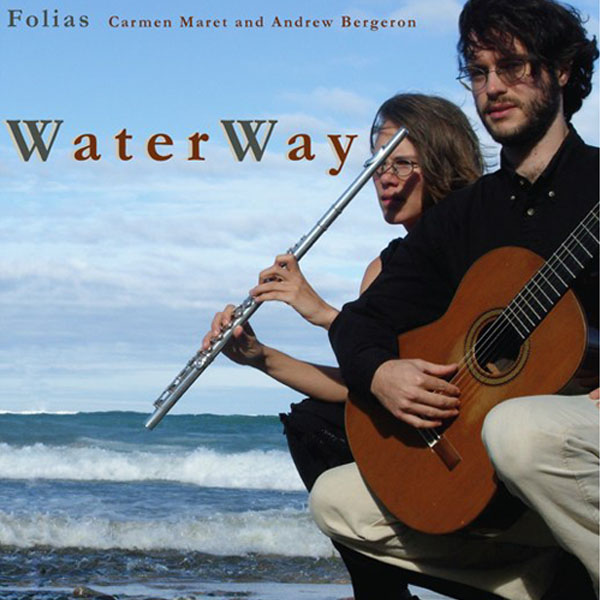 Carmen Maret and Andrew Bergeron, together known as Folias, here showcase their talents and interests, which include tango (Maret is a dancer as well as a musician and a scholar of all things tango), composition, and improvisation. Titled “Waterway,” Blue Griffin 175 is essentially an extended suite inspired by Lake Superior and its environs. “Marufo Vega” mixes well known Piazzolla and Villa-Lobos pieces with less familiar ones by other Latin composers, and includes Bergeron’s and Maret’s Despoblado Suite. The self-titled “Folias” is, with the addition of Bergerons’ Three Metamorphoses, mostly devoted to tangos. Maret and Bergeron are facile players with a fine feeling for Latin music. Their compositions are tonal with a simple, direct melodic appeal—a few “sophisticated” harmonies and lines surface, but they don’t veer into atonality. They draw on tango rhythms and melodies sometimes; at other times they write with a scenic sensitivity, as when they flowingly capture the sense of being afloat on Lake Superior. Birdcalls, insistent and raucous rather than sweetly twittering, can be heard, and I had the impression that long vanished Native Americans weren’t too far away. While they often write complex parts for both players, they just as frequently present Maret’s improvisations supported by energetic strumming. This imparts a casual flavor, as if the two musicians, who enjoy the great outdoors, took up their instruments for a spontaneous jam session around a campfire, bent on entertaining themselves as well as any local inhabitants, animal, mineral, or vegetable. “And the Cacti Go Wild!” is the third movement of the Despoblado Suite, which humorously captures the audience’s delirious response. “Desert Rain”—the first part of the Suite—uses harmonics,arpeggios, and flute patterns to paint a delicate tone picture; the gentle beginning intensifies as the rain falls faster.

Maret plays flute, alto flute, and piccolo, and Folias’s arrangements of some tango staples—Milonga de mis amores, Oblivion, and Libertango, among others—colorfully employ saxophone, tabla, and pipe organ. The tabla seasons the familiar tunes with exotic spice, and Soledad’s pipe organ (played by producer/Blue Griffin founder Sergei Kvitko, recently profiled in Fanfare 32:2) carries religious associations that mesh surprisingly well with tango’s earthy soul. The saxophone’s full midrange tone adds a sensual touch. My one mild criticism is that despite the players’ obvious affinity for the genre, the improvisations don’t always serve the music. I felt this particularly in Milonga de mis amores: the improvisations, while fun to hear, stretch the fabric so that the composer’s originally taut organization suffers. It’s already perfectly written and doesn’t need “improvement.” It’s an exceptional composition of its type, musically analogous to the dips, hesitations, and quick lower leg shakes of virtuoso tango dancing.

However, proving that there’s no accounting for taste, I unreservedly enjoyed the ingenious rearrangement of Villa-Lobos’s Étude No. 1 for guitar in which tabla ornaments the moto-perpetuo rhythm while the flute plays melodies suggested by the guitar’s shifting harmonies. In addition, the subtle rhythmic stresses in Bergeron’s playing align the piece with tango in ways I wouldn’t have imagined. Continuing the tango theme, Piazzolla’s Libertango thrillingly unites seductive lyricism and irresistible momentum. A former hit for singer Grace Jones, it also featured in Sally Potter’s film, The Tango Lesson, with Yo-Yo Ma’s passionate cello taking the lead. Folias plays Piazzolla’s History of Tango with full appreciation of its fluctuating moods, now effervescent, now sadly wistful, its humor laced with irony. The Piazzolla pieces—Libertango, Oblivion, and History of Tango—could serve as a capsule course to introduce him to those who haven’t yet discovered his tango-drenched voice.

As mentioned, “Folias” (the CD, not the group) is mostly devoted to tango, but Bergeron’s Three Metamorphoses forsakes Latin Americanism for lullaby sweetness (“The Child”), peaceful melodiousness temporarily disrupted by vigorous strumming (“The Lion”), and aggressive concentration tinged with an abstract Middle Eastern presence (“The Camel”). Both “The Lion” and “The Child” include vaguely Baroque guitar figurations, but the melodies are definitely not from that era. I was initially puzzled at the ferocity of “The Camel” compared to the benign calm of “The Lion,” but the inset notes explain that Bergeron is referring to three characters from Nietzsche’s Thus Spoke Zarathustra: “The camel takes the world on his back, a self-punishing outlook on life; the lion makes the world his domain; and the child abandons these realms saying ‘yes’ in acceptance and forgiveness.” The remaining tangos share stylistic similarities, but they’re all worth hearing, and they don’t have to be heard at once; dip in from time to time, unless you’re insatiably addicted.

To sum up, “Folias” and “Marufa Vega” probably are the two discs most likely to appeal to the average Fanfare listener (if there is such a thing). “Waterway,” however, has its mysterious, charming, and evocative moments. To cite a few: Fog Break effectively conveys the immersive experience of being shrouded in mist, followed by gradual clearing; Lake Superior Winter’s initial bleak austerity soon shifts to easy-going melody as if to celebrate nature’s marvels in any season; Alpha’s Last Dance is a slow, affecting, Russian-flavored waltz; and Gauntlet of Death’s flamenco-tinged severity is balanced by an energetic middle section that commemorates migrating salmon’s indomitable upstream journey to their ancestral spawning grounds. Your choice.