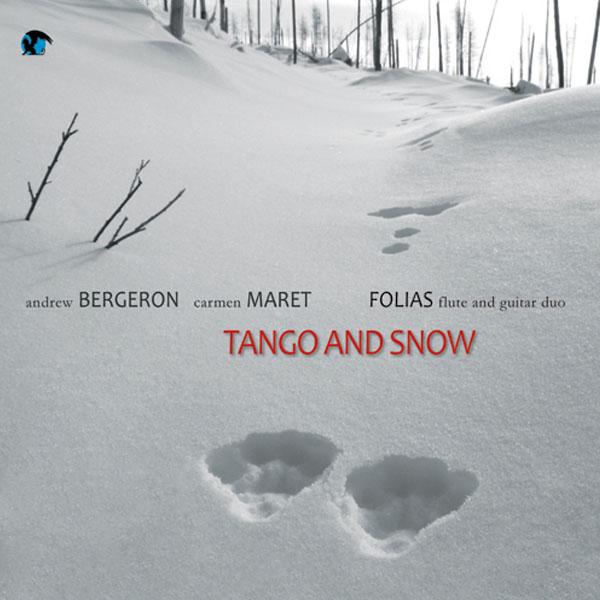 The husband-and-wife team of Andrew Bergeron and Carmen Maret form a multitalented flute and guitar duo that specializes in tango music. Bergeron has a master’s degree in composition and teaches guitar at Grand Valley State University and two other colleges in Michigan. Maret is a graduate of the University of Missouri’s Kansas City Conservatory of Music; she holds a master’s in flute performance and a graduate degree in ethnomusicology from Michigan State University. Currently, she works at the Grand Rapids Tango Community as a teacher and musician. Bergeron and Maret, playing together as the Folias Flute and Guitar Duo, have performed across North America. They have released four compact discs, three on the Blue Griffin label and one on White Pine. Since both of them are classically trained musicians, the addition of tango music and its variations to their repertoire has markedly increased their value as composers. They are technically proficient instrumentalists who can play and compose idiomatic Latin American music as well as more traditional classical pieces that describe the scenery of their home state of Michigan.

The title Tango Destroyer relates to a name that Astor Piazzolla gave himself. Maret based her piece on harmonies heard in “Café 1930,” the second movement of Piazzolla’s History of Tango. Adequate Conditions Blues is an essay in music about the mental equilibrium earned by living through the ice and snow of a particularly cold Michigan winter. It is possible that Algonquin Vals was written during the same winter. At that time the couple was staying in a traditional dwelling called a yurt in Algonquin Provincial Park in Ontario, Canada. Their living conditions were definitely less than adequate, but this music, like many works written by impoverished musicians of the past, turns privation into art.

Maret’s compositions—Pajaro Rojo Santo, The Lemon Smugglers, Cumparsita Cats, and Whiplash Rides—are all interesting pieces that can certainly be enjoyed by almost any listener who likes either classical or Latin American music. Bergeron’s title piece, Tango and Snow, was written in the nuevo tango style espoused by Piazzolla, which could incorporate jazz and classical influences. During the 1950s, he brought new harmonic structures to traditional tango composition. Bergeron works with multiple strands of music in constructing his fascinating 21st-century compositions.

Bergeron’s nature-inspired works evoke completely different sentiments. Cross-country skiing on a moonlit but occasionally rainy December evening in Canada is the inspiration for totally charming, poetic music that brings to mind the sound and spirit of a stormy night. It is quite different from the tangos, and it shows the versatility of the musicians who compose in both veins.

Engineer Sergei Kvitko produces a clear-sounding disc with ambiance that approaches that of a small concert hall. I hope some readers will dance to this disc and put the results on the net, where we can all see them.